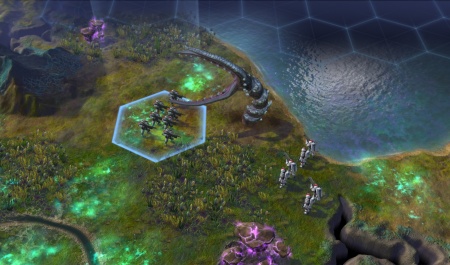 4x is a term used in Civilization style gaming, and represented perfectly with Civilization: Beyond Earth. The term 4x stands for explore, expand, exploit, exterminate, and is the driving factor behind the Civilization series.

Exploring is a large part of any 4x game, allowing you to spread out and dominate the landscape. In Civilization, early exploration has always been important, as resources found at the beginning of a civilization's lifespan can affect the flow of the game, sometimes having drastic influences many centuries after the game began. Civilization: Beyond Earth will likely feature heavy exploration, as the developers have stated it will take place on an unknown terra, suggesting whoever explores the most and discovers resources earliest will have a definitive edge on the competition.

Expanding is the natural follow-up to exploration. Expansion entails the creation of settlements far removed from the first in order to secure your territory and lay stake to resources and trade routes. This can be used to great effect to close off trade routes and sea passages from your enemies, forcing them to find different and often more dangerous, long routes.

The Exploit element in 4x is the way a player exploits the natural resources found during Exploration and Expansion to their war, construction, and settlement efforts.

With so much expansion, you are bound to face war with your neighbors - this is what Exterminate is all about. Face off against your enemies with machines of war and destruction, and lay claim to the world that is rightfully yours!