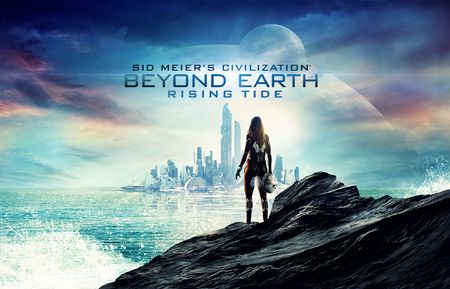 After the first wave of great colony ships departed Earth, the jubilation of humanity was short-lived. Those left behind fell into a violent struggle over the quickly-diminishing resources on their barren home world. From this tumultuous time, four new factions arose. These newcomers were grounded not in the idealism of their predecessors, but on opportunism, resilience, ruthlessness, and above all a commitment to their own survival.

Now, many decades after their first landfall on a new planet, the proud survivors of the first expeditions beyond Earth look up to see the skies darkened by a new breed of pioneers.

Beyond Earth extended the Civilization franchise from its historical setting into the possible futures of science fiction. Rising Tide extends Beyond Earth to new frontiers on the planet’s surface and beneath its seas, adding even more choices and diplomatic options as you continue to build “just one more turn” toward a new vision for the future of humanity.

Four new sponsors have joined the space race to settle the colonies.

Affinities are now dealt with in a hybrid approach. When different affinity points are earned, they have an amplifying effect, and certain units now require points from multiple affinities. Standard units now also have affinity variations that make them more powerful.

The diplomacy system in Rising Tide has been completely rebuilt, and is more geared towards effective trade. Players can now trade for traits that improve their civilization, and the new diplomatic capital system is designed specifically to facilitate this trade. AI will establish deals that benefit them with greater transparency, and the near fear and respect system will make these relationships more clear than they have been thus far. A new war score system finishes the diplomacy overhaul by establishing the current progress of conflicts with other civilizations.

A wide range of structures have been modified and added in Rising Tide. These changes make the buildings more dynamic, and adapt their use-cases to more strict scenarios.

Additional wonders are added by the expansion.

The naval system has been overhauled for Rising Tide. New submarine units have been added, and a new floating city concept has been implemented. Land-based resources like Firaxite can now be found in the waters, and resource pods can be found throughout the oceans. Expeditions have also been added to the game, allowing for enhanced exploration.

New alien lifeforms have been added to the game to facilitate the expansion of the universe.