Supremacy is one of the three affinities in Beyond Earth, the other two being Purity and Harmony. 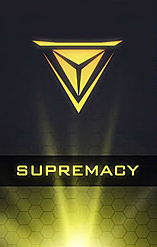 Supremacy represents the most dramatic change for humanity. This Affinity sees technology as the thing that saved humanity after The Great Mistake. Technology is what took man from Earth to the new planet, so they decide to double down in cybernetics. As the supremacy player sheds his or her humanity, they adopt a more austere robotic appearance. By the end of the game, vehicles and military units are sleek, efficient, and often unrecognizable from their human origin.

Supremacy has an interesting tactical design. Unique Supremacy units, for the most part, work better in tightly formed groups than they do alone. This is because of the various adjacency buffs the units get from being near each other. This makes positioning your units more important, so you can maximize their battle potential. On the other hand, you can give up these perks for a “lone wolf” upgrade that buffs your unit when they are not next to anyone. You can live out your sci-fi alien-squashing fantasies by taking a lone wolf marine into the middle of an alien nest and open fire.